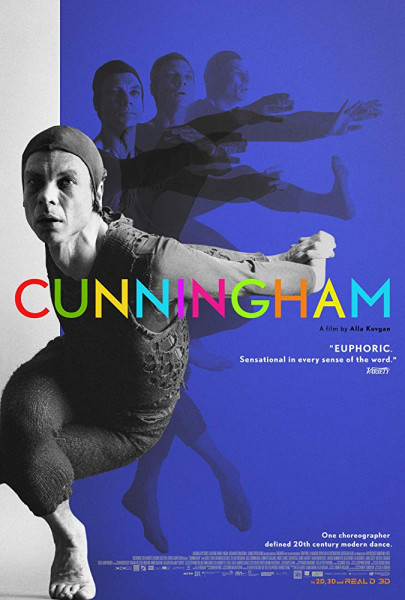 Football withdrawal weekend forces one to contemplate.
The four hour entertainment escape is no longer easily available and once is forced to figure out how to spend the rest of their "free time."
Exercise?
Visit parks and museums?
Return to the movie theaters?

"Cunningham" is definitely a film to escape from the ordinary.
It is a documentary that explores the work of Merce Cunningham,
a performing artist who was on the forefront of Modern American Dance for over five decades.

The film is not a dry chronology of the man's life,
but an artistic expression of how Merce Cunningham interpenetrates his life and time.
On Wikipedia one can see these statistics and benchmarks (National Medal of the Arts, a MacArthur Fellowship), but "Cunningham" is more than that.

Merce Cunningham believed in the performing arts ensemble, in which he equally incorporated the visual, technological and musical elements. Throw in a modern sensibility of a painter like Jackson Pollock and a jazz solo like Charlie "Bird" Parker, one sees Cunningham's artistic flair.

As escapist entertainment, "Cunningham" might not be the escapism for one who is waiting for the NFL Draft Picks ESPN television special in a few months. "Cunningham" is a film for those who want to explore new things about the world we live in.