The Querulous Nights of Athena Minerva is the most disturbing book that I have written; it is also my least profitable. Dark themes are a tough sell; but, if one balances the fine line between horror with humor and humanity, a story can be profitable as It and Annabelle Creation can attest. Mother! was released last weekend and was a box office disappointment. 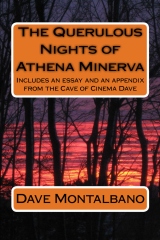 Part of the attraction of Mother! are the deep Biblical themes that Aronofsky (who also did the much-panned Noah) claims he attempted, with an emphasis upon the Book of Genesis. The film begins in flames and transposes into a jeweled crystal that Javier Bardem places on the mantel. Once set, the scenery expands to reveal Jennifer Lawrence sleeping on the bed. Lawrence (revealed to be the title character) goes looking for “Him” (Bardem’s character name).

After the first jump scare, Aronofsky keeps the focus on Jennifer Lawrence’s face. Sometimes Aronofsky pulls the camera lens back to reveal that Lawrence does construction inside the house, while barefoot. A Man (Ed Harris) knocks on the door and says he is Bardem’s No. 1 fan and that he needs a place to sleep. After a night of drinking, it is revealed that the “Man” is missing a rib. The next day, a “Woman” (Michelle Pfiefer) arrives and reconnects with the “Man.” Mother is not amused.

During these expository scenes, Aronofsky directs with minimalist restraint. The cinematography invokes the paintings of Andrew Wyeth. Yet, as more characters enter the house (Mother never steps off the porch), the set becomes claustrophobic and invokes the dark visions of Francisco Goya and Caravaggio.

As the old saying goes, “Half of Art is knowing where to stop.” Such is the case for this film, which becomes as ponderous as a house waiting for electricity.

The story lacks coherence and one tires of Jennifer Lawrence’s cries for help, for she is not a real person but merely a dramatic symbol of Aronofsky’s fevered mind. Like Stanley Kubrick’s overrated The Shining, Mother! may be the darling of the urban elitist critic circle in a few decades. For the time being, there are better movies on the big screen besides this one.
Collapse