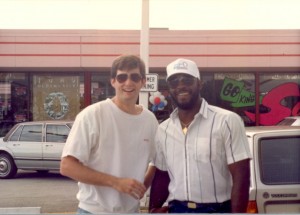 When I wrote my end-of-the-year review column, I started by acknowledging Class Acts – people I met at festivals, press junkets and conventions. These individuals were in the spotlight and handled their situation with grace, humility and a sense of humor. Though it has been over 25 years since I last talked with him, Tony Nathan definitively deserves a spot on the Class Act list. Tony Nathan’s teenage years are the subject of Woodlawn, a new movie that opened last weekend in local theaters.
Woodlawn opens and closes with images from a Reverend Billy Graham Crusade in 1972. Forced busing has created conflict in Woodlawn, AL as federal desegregation laws are being enforced across America. Woodlawn High School football coach Tandy Geralds (Nic Bishop) goes to work with a revolver strapped to his ankle.
The school year begins in chaos and the first football team meeting begins with self-imposed segregation. When the gnome-like Hank (Sean Astin) asks to speak to the team, Coach Geralds allows it. After Hank talks about his faith in Jesus Christ for an hour, the team becomes unified.
Woodlawn provides enough football action scenes to fulfill sport movie expectations; however, this historical movie is not clichéd. Woodlawn is a movie about character growth and development. In the center of the change is Tony Nathan (Caleb Castille), a high school student whose nickname is “Touchdown Tony”.
Caleb Castille’s performance captures the quiet dignity of Tony Nathan. Castille is supported by Sheri Shepard as Mama Nathan. Having portrayed FDR and Howard Cosell in the past, Jon Voight adds Paul “Bear” Bryant to his quiver of celebrity impersonations. Gifted actor that he is, Voight manages to bridge the gap between the man and the legend. The actor’s ensemble is worthy of the Woodlawn High School football team.
The issues raised in Woodlawn are just as relevant today as they were in 1973. There is a direct correlation between rioting for justice and finding common ground in sharing one’s faith. Woodlawn is a good family movie or a film that can be used for a school field trip. 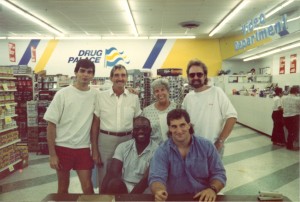 An RKO Radio Station, 105.9 WAXY FM Radio Promotion at the old Eckerds at the Publix Shopping Plaza, where Five Guys is today. Featured in the photo are Cinema Dave, his dad, Jerry; his mom, Mary, and Rick Riley from the 105.9 WAXY FM morning show. Front row – Coach Tony Nathan (#22) and John Bosa, defense for the 1988 Miami Dolphins.