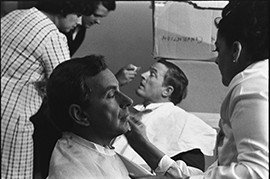 There is a saying that national politics begin after Labor Day. While we are still a year away from when the national media begins to dissect the potential presidency of Joe Biden or Donald Trump, etc. this is a great time to review American history and ask the question “How did we get here?”

Best of Enemies is an 87-minute documentary about an experiment that third place ABC New Broadcast attempted, circa 1968. It was the time when President Johnson’s administration went up in flames and he announced that he would not seek a second term. Robert F. Kennedy was supposed to be a shoe-in for the Democratic nomination, but he was assassinated by Sirhan Sirhan earlier in the year. As home television transitioned from black-andwhite to color, the nuclear family unit witnessed the United States losing the Vietnam War on CBS News with Walter Cronkite and NBC News with Chet Huntley and David Brinkley.

Both NBC and CBS provided gavel-to-gavel coverage with multiple camera angles at the Republican Convention in Miami and the Democratic Convention in Chicago during the summer of 1968.

Lacking the financial resources of NBC and CBS, the ABC National News bureau decided to use fewer cameras, cover the major speeches and provide political commentary from political experts representing Democratic and Republican perspectives. Given their public sophistication and that both men were writers, Gore Vidal was chosen to represent political left and William F. Buckley was chosen to represent the political right for a series of 10 debates at both conventions. 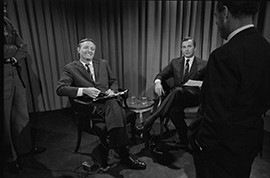 As we learn from this documentary, both Buckley and Vidal had a deep-seated hatred for each other that was masked by their media training, poise and education. Through the series of debates, we see two master debaters spar with each other with minor tweaks and taunts. When in the sunshine of the Miami convention, the first five debates seem as jovial as a checkers match on Collins Avenue.

Yet, as the location transfers to the notorious convention in Chicago, the oppressive atmosphere outside the convention hall permeates the political discourse between Gore Vidal and William F. Buckley. Directors Robert Gordon and Morgan Neville wisely let Buckley and Vidal speak for themselves. The 10 debates grow in intensity and by the final debate, the sophisticated faÇades melt into raw anger.

Given the manufactured controversy of today’s news cycle with broadcast news, cable news, websites and personal blogs, Best of Enemies is an important historical documentary that explains the rise of modern journalism. With fewer resources and celebrity news readers, and working in a broken down studio, ABC News set into motion the way the news media today covers political conventions each leap year.

Best of Enemies features some intriguing behind the scenes outtakes. It is an entertaining documentary with much humor. Yet, it is the intellectual showdown between Gore Vidal and William F. Buckley that you will remember long after viewing it. 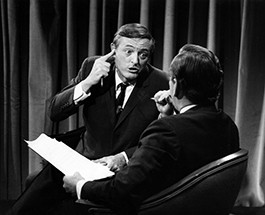 While enjoying the fruits of their success, the three young men are manipulated by the suspicious business dealings of Jerry Heller, portrayed by Paul Giamatti – who has added depth to similar roles that he played in Rock of Ages and Love & Mercy.

For peers my age who enjoyed the music of Bruce Springsteen, and Huey Lewis and the News, Straight Outta Compton provides a history lesson about the rise of rap music.

The film presents Ice Cube, Dr. Dre and Eazy-E as the next generation’s Rat Pack. Like Frank Sinatra’s connections to the mafia, Straight Outta Compton reveals these artists’ connections to some pretty vicious thugs with pit bulls.

The film has earned $130 million during the month of August, the only box office success of the month. Modestly produced with a great attention to detail, one sees the financial model for films like Straight Outta Compton setting a trend on the big screen in the future.

During the next couple of months, we can look forward to some fascinating motion pictures from Guillermo Del Toro, Johnny Depp, James Bond 007 and Disney’s first Star Wars feature at Christmas time. In the meantime, have a safe Labor Day.

During his childhood, being raised on a Missouri farm, young Walt would compulsively draw characters on barn doors and walls. As a young adult, Walt and his friends Ub Iwerks (Armando Gutierrez) and Rudy Ising (David Henrie) form their own animation studio and produce Laugh- O-Grams for the Newman cinema chain. However, the high cost of producing the animation forces Walt Disney’s first business into bankruptcy. His future business dealings get even worse.

It is refreshing to see a modern day movie that celebrates entrepreneurship and moral values. Disney’s perseverance is directly proportional to both his creativity and his loyalty to friends and family. With nary a cuss word, Walt Before Mickey is a fine family movie to go see this Labor Day weekend.

It was made in South Florida by Floridans. For screening locations, visit www.waltbeforemickey.com
Collapse