At the recent **Fatality Fest** convention, actress Debbie Rochon and I discussed the cinematography of **The Blair Witch Project.** On the big screen, Debbie found the film nauseating, but enjoyed the narrative on the television screen.

Perhaps the opposite will be true when **Man of Steel.** leaves the Fort Lauderdale Museum of Discovery IMAX Theater, On the smaller screen, the spectacle will be diminished because of the plot holes and weak character development.

The film opens on the doomed planet Krypton. Despite his best efforts, scientist Jor-El (Russell Crowe) is unable to prevent the end of the world, so he sends his only begotten son, Kal-El, to the cornfields of Kansas on the planet Earth. The boy is raised by John (Kevin Costner) and Martha (Diane Lane) Kent and adopts the name Clark Kent (Henry Cavill). A stranger is a strange land, Clark Kent is raised with moral values and he learns to fight for truth, justice and the American way.

Surviving the destruction of Krypton is General Zod (Michael Shannon) and his army of mercenaries. Zod has a grudge against Jor-El and his family. When he learns that the son of his arch enemy is living on Earth, Zod destroys the planet in pursuit of revenge.

**Man of Steel** is not a linear story. The film is full of flashbacks that are not in chronological order. The slower episodes featuring Clark and his step parents are the most emotional poignant. We see a special needs student who is bullied. We all know that Clark Kent could easily demolish his tormentors, but John Kent teaches his son restraint and discipline. These values presents **Man of Steel's** finest moments.

The film sags with an over reliance of special effects and attention deficit disorder editing. Moments of cliffhanging thrills are lost. The fight scenes lack fluid motion and visual sense.

With a $116 million dollar record breaking gross, **Man of Steel** is THE motion picture of the moment. The reviews and word of mouth about this **Superman** reboot has been split between either love or hate. Younger audiences are proclaiming **Man of Steel** as the best **Superman** ever, while the older crowd misses the innocence and heart of the movies and television series.

Nine years after the events of "Before Sunrise," Jessie and Celine unite again for a few hours in her home country of France. The two walk around and talk about the previous nine years of life.

**Before Midnight** is a film that was 18 years in the making. In 1994 actors Ethan Hawke, Julie Delpy and director Richard Linklater collaberated on an art house movie titled **Before Sunrise.** Filmed on the streets of Vienna, this plotless movie featured Jessie (Hawke) and Celine (Delpy) talking about the meaning of life. Nine years later, Hawk, Delpy and Linklater reunited **Before Sunset.** Shot in real time, this 80 minute motion picture reveal Jessie and Celine in their thirties. This time they roam the streets of Paris, this time the two talk about regrets. Both movies ask the question, will Celine and Jessie get together?

**Before Midnight** presents the morning after. Now in their forties, Jessie suffers from a father's guilt, while Celine feels like she has betrayed her career aspirations by becoming a mother. The couple have spent the summer in a writer's retreat on a Greek Archiplelago. When the host family agree to babysit the children, Jessie and Celine are given one night of intimacy.

For the first two thirds of the movie, **Before Midnight** seems to be repeating the formula of the first two movies. However things change for the worse when the two arrive in their claustophobic hotel room. What was once cute volleys and flirtations, now becomes ugly and abusive.

To Hawke, Delpy and Linklater's credit, **Before Midnight** is a truthful movie. The three dig into their own personal barnacles and let them scrape each other. The fight in the hotel room is not comfortable to watch, but it does feel like a logical extension from that one night in Vienna 18 years ago.

"Monster Inc." was released during holiday season two months after the 9/11 attacks. The review can be found on page 417 in "The Adventures of Cinema Dave in the Florida Motion Picture World."

12 years ago, **Shrek** battled **Monsters Inc.,** in what became a symbolic battle between DreamWorks and Disney/Pixar studios, respectively. **Shrek** won the first ever Oscar for best animated feature, but **Monsters Inc.** won more awards and the box office gross. After four movies, **Shrek** retired into his swamp, but the characters from **Monsters Inc.** never lost public affection.

**Monsters University** is the prequel and puts the focus upon the one eyed midget Cyclopes Mike (voiced by Billy Crystal). While buddies in **Monsters Inc.,** we discover that Mike and Sullivan (John Goodman) were undergraduate rivals. In their petty rivalry, Mike and Sully run afoul Dean Hardscrabble (Helen Mirren), the hardnosed administrator who is part dragon. 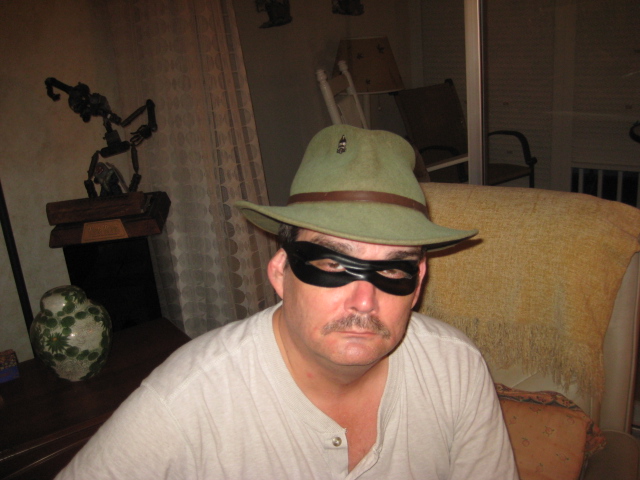 When I heard that the politically correct Walt Disney studios would be producing **The Lone Ranger,** I started posting on websites - "They better play "The William Tell Overture stanza March of the Swiss Soldiers." Director Gore Verbinsky did not disappoint, the adopted **Lone Ranger Theme** is heard and it was one of the most rousing moments in cinema since John Williams conducted the **Indiana Jones Theme** thirty two years ago. The audience exploded and clapped in unison.

While on patrol with his brother, Reid and the Texas Rangers are ambushed by the notorious Butch Cavendish (William Fichtner), who is part cannibal. Unlike pretty boy villains from **The Avengers** and **Star Trek,** Cavendish is one of the most loathsome villains to arrive on the big screen since Bruce Dern shot John Wayne in the back in **The Cowboys.**

Tonto rescues Reid and convinces the neophyte to wear a mask to disguise his identity. As the pair track down the Cavendish Gang, they encounter a railroad baron (Tom Wilkinson) and a prostitute with an ivory leg (Helena Bonham Carter). When a white horse joins the pair, the legend of **The Lone Ranger** begins.

**The Lone Ranger** returns the viewer to the thrilling days of yesteryear. Like a good action serial that inspired **The Rocketeer** and the best**Indiana Jones** movies, Verbinski directs uncomfortable moments that lead to a satisfying conclusion each time. There is also an homage to the Buster Keaton Classic **The General,** featuring the stone faced Tonto riding the rails.

As much at Clayton Moore's **Lone Ranger** encouraged one to be a responsible American citizen, this update features modern cultural concerns. We see corrupt businessmen in collusion with government officials. When bunny rabbits get too aggressive, Tonto states that "nature is out of balance." The purity of **The Lone Ranger's** values might be old fashioned, but are still needed in the twenty first century.

Along with **Star Trek Into Darkness,** **The Lone Ranger** is the best summer blockbuster this summer. There is not a better movie to see this 4th of July weekend.