While Sinister Simon is upset that Cinema Dave's blog has been nominated for a Rondo Hatton Classic Horror Award,

one must admit that this pesky puppet has taken on a life of his own.


While Cinema Dave's nomination can be found on Ballot # 19 for "Best Blog,"
"Sinister Simon meets Linnea Quigley" can be still be a write-in candidate!

Here is the link;

Customer Service authorities recently searched a shopping plaza on the east side of Fort Lauderdale and a shopping plaza near the south fork of the New River to follow up on a report that customers get special treatment in Broward County’s “plaza libraries.” Turns out it’s true. Customer Service Core Team members confirm that customers feel special when assisted by Cinema Dave at the Imperial Point Branch and Erica Walker at the Riverland Branch.

Known in the movie underworld as “Cinema Dave” local movie critic – Imperial Point Branch Librarian 2 Dave Montalbano was recognized in the stacks and the paparazzi – err… we mean the Core Team photographers… began their chase to snap a photo soon to go viral… or at least become legendary in the library world. The person tipping off the team… none other than a Fontaine by name! No, not the famous actress Joan Fontaine (movie trivia #1 she is the only actress to have won an Academy Award for a performance in a film directed by Alfred Hitchcock), but possibly a very, very distant and unknown relative. Customer Linda Fontaine discovered and pointed out the “wonders of Dave.” She looks to Dave for the most detailed and hard-to-find reference information. Dave is always at-the-ready. Fontaine (movie trivia #2 not the famous actress whose older sister is Academy Award winning actress Olivia de Havilland) describes Dave as very helpful, knowledgeable, pleasant and informative. 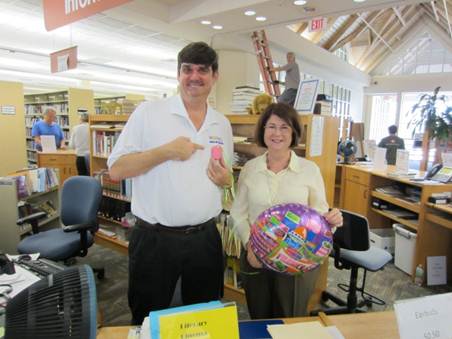 Information Scientist Cinema Dave is seen here with Imperial Point Branch Manager Jill, as a worker climbs a ladder to catch a glimpse of Cinema Dave.


If you’re a regular customer at the Riverland Branch and have been helped by Erika Walker, she’s probably got your name and your number… number of holds ready for pick up that is. That’s the kind of information Walker has buzzing around in her head that makes her appear to be a mind-reader to customers. She anticipates their needs even before they speak! Customer Joy Cardova said Walker is sweet, helpful, always smiles and acknowledges her by name. Cardova is amazed that Walker retrieves her holds for her as soon as she walks through the library doors and has all the materials ready for her. Customer Bob Leonard who happened to pick up a book that day described Walker as nice, pleasant and quick. He said she made it so easy for him to get his h 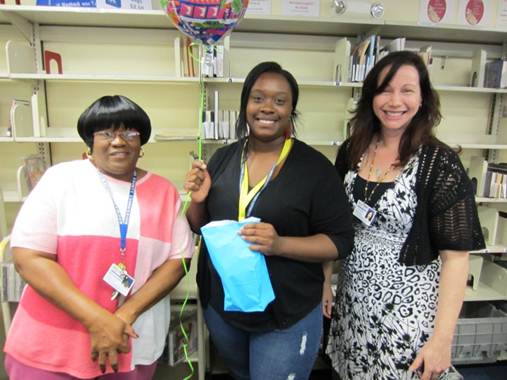 Thanks Dave and Erika.
Members of the BCL Customer Service Core Team will continue their bold ongoing mission… to explore strange new accomplishments, to seek out new satisfied customers and helpful staff, to boldly go on revealing what most have suspected all along… that Broward County Library employees give their best, nothing less to their customers. Those caught providing great customer service will be rewarded with a thank you gift. Secret Shopper on-the-Spot Rewards, which is geared around promoting customer service excellence, is funded through an employee recognition grant from the Broward Public Library Foundation.
Collapse