Despite intense box office competition, **Arbitrage** held it's own in limited release at the FAU Living Room Theater. It is a timely story the explains the business concept of "arbitrage" or practice of taking advantage of a price difference between two or more markets.

For many decades, Robert Miller (Richard Gere) has been a master of arbitrage on Wall Street, until his cash flow constricts. While presenting an impeccable facade to the public, Miller's home life has become a den of iniquity.

Much praise has been given Richard Gere's performance, though it is a role he was born to play given his previous three decades of work on the big screen. As Miller's personal fury, British actor Tim Roth steals the show as New York cop who would love to bust a Manhattan Master of the Universe.

Limping along at the box office is **ParaNorman,** a stop motion animation film. This poorly marketed movie is a gem of a monster movie has generated much positive word of mouth. If you get a chance, see **ParaNorman** on the big screen before it is too late, it is the best animated film of the year.

**ParaNorman** opens in a New England neighborhood that looks eerily similar to that of Haddonfield, Elm Street and Chrystal Lake. Young Norman is a freaky kid who sees dead people. Since Norman is basically a nice kid, he gets along with the ghosts that haunt his neighborhood.

With such a Gothic set up, **ParaNorman** succeeds by being contemporary fable. Frightening at first, zombies rising from their graves are less scary than mob rule inspired by reality television shows like **Jersey Shore** and **Honey Boo Boo.**

Besides telling an entertaining story for both children and adults, **ParaNorman** succeeds by presenting a fable worthy of Aesop. We learn that the cause of the Old Witch's curse is a contemporary problem that has been the plague of all public schools. **ParaNorman** can provide a great resource for a lesson about bullying.

As played by Robert Englund, Freddy Krueger was born the same year as "Ghostbusters," "Indiana Jones and the Temple of Doom," "Berverly Hills Cop" and "The Terminator." Of all these movies, "A Nightmare on Elem Street" spawned more sequels per character.

Entertainment Tonight announced the filming of this Freddy Krueger sequel, announcing the birth of a new cult figure. For the first, and last time thus far, a male is the lead of this "Nightmare" sequel.

Heather Leagenkamp returns as Nancy Thompson, the heroine of the first "Nightmare" flick. Instead of being a mere stalker flick, "A Nightmare on Elm Street Dream Warriors" added Freudian depth to the series.

As one of the souls trapped in Freddy Krueger's chest, look for a cameo appearance from Scream Queen Linnea Quigley, who was peaking with her work in "Return of the Living Dead," "Hollywood Chainsaw Hookers" and "Nightmare Sisters."

"The Dream Child" wraps up the trilogy begun with "Dream Warriors."
Lisa Wilcox is the heroine with an unexpected child. Can a fetus dream?

Given the pregnancy/abortion angle of this "Nightmare," "The Dream Child" was the least appreciated of the "Nightmare on Elm Street" flicks.

With 5 movies and as a host of an anthology horror show, New Line Cinema's film series had reached the law of dminishing returns. Given that the nickname for New Line Cinema was "the house that Freddy built," management decided to give Freddy Krueger a swan song.

As a film, "Freddy's Dead the Final Nightmare" is a hodge podges of dreams & nightmares, with really nothing new visually. Yet this movie will be remembered for the hype of a 3 D finale, Los Angeles declaring a Freddy Krueger Day and cameos from Johnny Depp and Alice Cooper as Freddy Krueger's wicked step father.

On the 10 year aniversary of "A Nightmare on Elm Street," Robert Englund was reunited with Heather Lagenkamp and Freddy's creator - Wes Craven.

Inspired by Robert Altman's "The Player," Englund, Lagenkamp and Craven portray themselves making another "Nightmare on Elm Street" movie. Things go wrong and could Freddy Krueger evil spirit have crossed the line from fantasy to reality?

Craven would attempt to revisit this theme with "Scream 3."
Lagenkamp would say goodbye to acting, but Robert Englund would return nine years later for "Freddy vs. Jason," where one can find a review on page 300 of
"The Adventures of Cinema Dave in the Florida Motion Picture World." 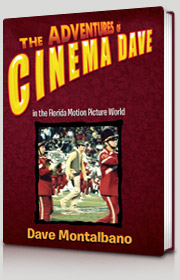 "Gran Torino" was presented as Clint Eastwood's swan song as an actor.
After staying behind the scenes directing "J. Edgar," "Hereafter," and "Invictus,"
Eastwood must have felt the call of Thespis for "Trouble with the Curve."

There are shades of the actor's iconic past in this role, but "Trouble with the Curve" is Eastwood's sweetest movie in thirty two years, since "Bronco Billy." As Gus, Eastwood portrays a veteran baseball scout who is suffering from either macular degeneration or glaucoma. He is too stubborn to get his eyes tested. Since he is unable to use a computer, Gus fears future umemployment.
Collapse